Speculations hold that Yuan devaluations are pushing Bitcoin’s price up. But we doubt this somewhat simplistic supply-and-demand scheme. Bity's developer Weipin shared thoughts on that matter with the team, and we decided to publish those as they reflect an insider's view on complex issues and critically frame the debate.

As The New York Times defines it:

Bitcoin is “both a new kind of digital money and an unusual financial network”.

Chinese exchanges accounted for 42 percent of all Bitcoin transactions for the first six months of 2016, according to an analysis performed for The New York Times by Chainalysis. Word has it that Chinese have used Bitcoin to evade capital controls. This is, however, widespread speculation: cryptocurrency trades made up a tiny portion of the nearly-700 billions USD that left China in 2015. 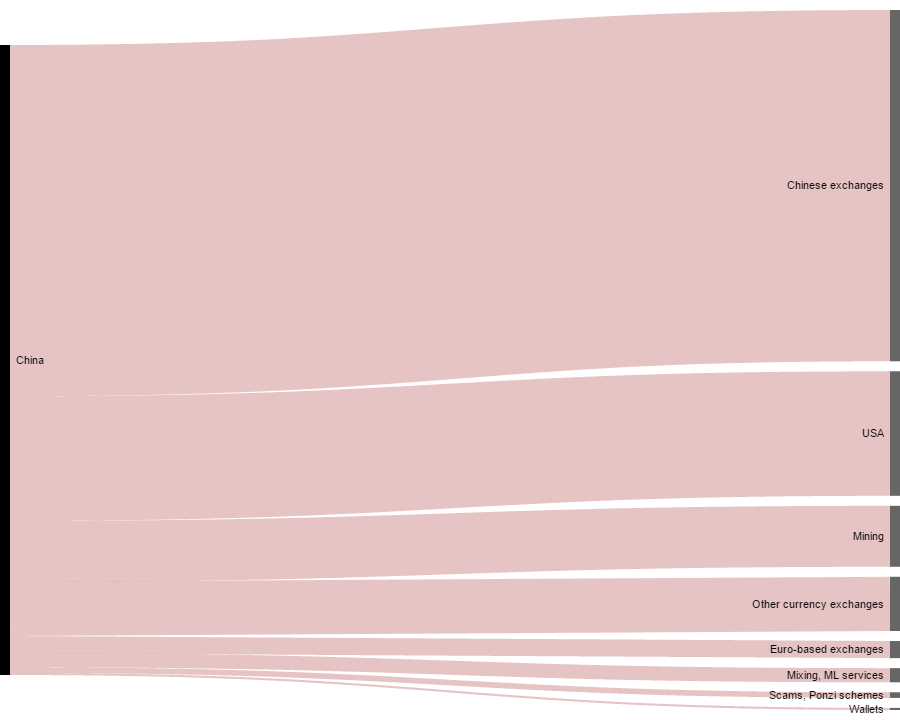 A simplified scheme of Bitcoin flows originating from China, spanning January-June 2016. The majority of the newly mined Bitcoins circulate on Chinese exchanges; that is where Bitcoin can be exchanged for Yuan. A tiny part of Bitcoin amounts are used to buy or sell products or services (the flow labelled as 'Wallets', corresponding to Bitcoins to and from online wallets for individuals. Data adapted from Chainalysis for the NYT.

With the Chinese Yuan devaluation, analysts have buzzed over the impact this loss of value of China’s national currency on the price of the bitcoin. Each of those elements is true - but are we able to seamlessly associate Bitcoin price movements to macroeconomic indicators? The answer is not straightforward, and plainly taking co-occurring events for causality is mistaken. For example, consider the largest single devaluation of the Yuan (CNY) that happened in August 2015: the BTC-CNY price was at its lowest point in years, and Bitcoin price did not experience any dramatic surge until months afterwards. So, if Chinese were buying Bitcoin as a response to devaluing Yuan, thus driving up the BTC-CNY price, why didn’t that happen in August 2015 as well?

I even hold that the Yuan devaluations have a negligible impact on the June Bitcoin price gains. Before explaining why I doubt the claim, let’s consider the following facts:

Given those facts and when thinking of the link between bitcoin and yuan, two scenarios appear plausible:

Is Bitcoin a Way to Evade Capital Controls in China?

To some, 50,000 USD per year is far from enough (while it seems to be lots of money to me!). Not to mention that their primary purpose is to transfer money out of the country.

However, Bitcoin is by far not the only way to move capital out of the country, and some of them are rather bold. For example, have you ever heard of that person who swiped a mainland bank issued credit card 800+ times at a Hong Kong insurance agent, buying 28 million HKD (3.6 million USD) worth of insurance policies?

Thus, examining the scenario where Bitcoin is used a way to move capital out of China, I bump into three questions that make this rationale more than debatable.

First off, the major exchanges operating in China are legal entities, that is, they are regulated by the authorities. Moreover, the exchanges themselves have the incentive to regulate the transactions. Take last year's Yishidun incident where a foreign-funded trading company underwent investigation for manipulating the market. BTCC, one of the main bitcoin trade places in China, “asked about the source of their [Yishidun] money”, and immediately reported the situation to the authorities. How can one evade capital control with companies operating in China and regulated by the authorities? (And if you wanted to swipe a credit card in Hong Kong, note that the approach has been banned since.)

Then, okay, you buy on the Chinese market and sell in overseas market(s). How can doing so drive up the Bitcoin price? It makes more sense that such activity will drive up the price in the Chinese market, but drive down price in the overseas market(s). Even more, the global price would eventually go back to the previous level following efforts by traders.

The one thing we agree with, mentioned in most of the media, is China's mining power. According to BitcoinChain.org, this is how mining power is distributed in the world. This chart shows that, for the last month, Chineses mining farms mined close to 70 percent of all new Bitcoins produced in that period. Note: rounding causes percentages not to sum correctly up to 100.

The last thing that bugs me here is to evaluate how convenient it would be to "cash out". Wasn't it difficult for a cryptocurrency exchange to even just open a bank account in the early days? Now, say you have your large balance (that is, higher than 50,000 USD obviously) in your oversea exchange account(s) - will it be a snap to withdraw your USD or EUR without undergoing any fund origin verification? Taking Bity’s know-your-customer procedures as a baseline for comparison, I think that would be complicated to do in the easy-peasy way it is presented in many articles supporting this option.

Is Bitcoin a Way to Store Value?

This scenario makes sense as we are seeing how central banks around the world are (mis)doing in recent years. But isn't buying gold another sound option for storing value?

In this case, both Bitcoin and gold become insurance, not an investment. Gold seems to be a more reliable option to me as it does not have problems like centralised miners, scaling and the horror if internet access is banned (hello, Great Firewall of China!).

For people outside China, various and sound options of buying gold exist. In China, different options are offered by banks, and one can also purchase physical gold at the Shanghai Gold Exchange. The process is so convenient that you can manage it with your phone, through your bank apps. You do not need to redeem the physical gold, instead, ask them to store your shares in the vault. Moreover, if you wanted to sell the gold, banks and dealers will buy it back. The transaction fee is next to zero, and the storage fee is free of charge (for now at least!).

The Shanghai Gold Exchange (SGE) compiled a textbook of gold investment and trading for ordinary people (like me). I cannot tell you how impressive this piece is: a well-written, beautifully rendered PDF from... a state-owned entity. No ugly Microsoft Word docs here. In no more than 20 pages, the guide introduces the history of gold and explains the gold-backed monetary systems China once had, gives a crash course on economics, describes how to trade gold and convinces the reader that ‘If you don’t own gold, you know neither history nor economics’.

More seriously, it is true that both gold and Bitcoin are volatile. It is thus logical to keep Bitcoin as a small percent of your assets. It would be bold to imagine that people are massively buying out Bitcoin blindly, ignoring the risks, just like that. So, again, there is no rational argument here supporting that Yuan devaluations are driving up the bitcoin price.

Also, well, many people will not be really concerned speculating what is driving the price up: enjoying that Bitcoin reached the highest point in two years is already keeping them busy ;-)

This article was originally written by Weinpin Xia.